High 5 Games offers games for land-based, online, and social platforms among the world's leading game developers. Founded in 1995, they are one of the largest independent casino games providers in the iGaming industry. Furthermore, they are responsible for making some of the most popular slots in the industry.

Their games are available in over 150 countries on six continents. High 5 Games is one of the producers of online games in the US, as their offices are located in New York.

450+ games are available through the Company's global operations. Furthermore, they operate the High 5 Casino, which has close to 17 million players worldwide. Additionally, it was named the fastest-growing virtual casino in 2012. Their popularity extends to Sweden as well.

All Slots from High 5 Games

Features of the High 5 Games

Despite being in the Gaming business for over 20 years, the Company maintains its innovative approach. They offer slots, table games, and live casino games on mobile devices. A player will encounter split symbols, tumbling reels, super stacks, and super symbols when playing any of the games.

Among the gaming industry's innovators and trendsetters, High Five is recognized as a pioneer. Several awards have also been awarded to them. Among their awards are:

Licensed by the top and most stringent authorities, High 5 Games guarantees their players and customers' safety, security, and reliability. They currently hold the following certifications

A total of 109 casinos offer the High 5 Games software, and the land-based casino Mohegan Sun was just added to the list.

Over 450 games are available at High 5 Casino, but there are always the slots that become firm favourites, including the Top slots below:

Temple of the Golden Monkey

As you approach, the sounds of the wild can be heard surrounding an ancient temple. Watch as the gold monkey keeps watch over the map scrolls, mysteries and treasures deep beneath. As you explore the unknown and seek riches, you will be thrown into the heart of the action in this 5x3 slot from High 5 Games. Play this themed video slot, released in October 2018, for beautiful graphics, intriguing features, and generous payout potential to keep players happy who are looking for entertainment and huge wins. In addition to the fixed jackpot, wilds and free spins, the tumbling reels and atmospheric sound effects give this slot its energy and engaging gameplay. The focus of this game is quality graphics, exciting gameplay, and generous winnings. Get ready to embark on a search for hidden mysteries on an epic journey through ancient ruins in this slot. Grab your map as you set out on an adventure you'll never forget. In this slot, you'll find two key features that will help you step up your winnings. There are two types of reels: the tumbling reels and the spinning reels. In this feature, winning symbols will disappear, then be replaced by symbols that fall from the sky as new winning combinations are created. As a result, the process continues to repeat until no more wins are made. When three scatter symbols appear on an active line, you will earn free spins. While you cannot retrigger the free spins, a wild can boost your chance for more winnings during the round.

In the base game of Genie's Palace, you'll find the wild train. This feature is triggered when all three genie lamp symbols and a wild symbol appear on the reels. When this happens, your lamp symbols will move over any coin or wild jewel symbol, collecting treasure as they travel across the reels; the jewel meter displays your total treasure to your left. During the wild train feature, collecting five or more of the same kind will trigger the free games bonus, which awards three free spins right away. While this is happening, all genie land symbols will turn sticky and hold their position throughout the round. As you collect wilds and gold coins during this round, you'll also earn one extra free spin per symbol.

A Night of Mystery Slot 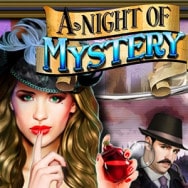 Play A Night of Mystery demo

Featuring a 5-reel, 40-pay line design, A Night of Mystery is packed with features and graphics. There are stacked symbols and several bonuses, while a clue collection bonus and free spins round out the fun. You need to follow clues in every spin of this slot, and the storyline is exceptional. As a detective, you must unravel the mystery of the murder, taking you into the alleyways of downtown. A big win is possible if the case is solved. One of four suspects have done it, and each seems guilty! A bonus round triggers when three or more of the same symbols that appear only on reels 2, 3 and 4 land anywhere on the reels. A free spins bonus of up to nine spins is available to you once you sign up! You can also find more spins by matching clues found while searching for free spins, in addition to the free spins. When you collect a clue, the symbol will also become Wild. Any additional paired clues will earn you three additional free spins. After you have accumulated all the free spins without triggering more, the bonus round ends. There is a maximum number of 21 free spins that can be won during the bonus round.

Roosters are calling, so rise to the occasion in the slot Lucky Rooster! High 5 provides you with a charming Asian-themed free slot game based on the Chinese zodiac's 12 signs. In 2017 it was released in the year of the rooster. It has five reels and four rows, and there are 1,024 ways to win. The rooster is the wild symbol in the game. He appears only on the second, third and fourth reels. Wild icons have the same powers as other symbols since they can be substituted to form winning combinations. The prize value of each rooster wild that lands on the reels are random. In other words, it ensures you at least a multiplier of 0.5x your total bet in the base game. If you get a wild during the free spins round, you will receive a 1x multiplier The game's scatter symbol, a Chinese firecracker, automatically awards seven free spins whenever three or more appear simultaneously. If you land four or five firecrackers on the reels, you will win 15 or 30 free spins.

"She Wolf," tells the tale of an exotic woman and her wolves. The background of this game includes mountains and trees, while the reels appear to be scrolls of parchment affixed to wooden stakes. There are three dangerous-looking wolves and a dark-haired woman on the reels. Additionally, there are some high card symbols You will immediately trigger the free spins bonus round if you land three or more scattered wooden wolf statue symbols. If 3, 4 or 5 scatter symbols land in this round's middle three reels, you will win seven free games. These symbols can be quite rewarding in the free games round, so keep an eye out for them. In this round, there is a super stacks bonus feature that becomes active. There will be stacks of symbols that can be converted into one of the game icons to create more winning combinations. There is also a Collection Feature, which lets you collect the letters to spell out the word 'Bonus'. Once you've collected all five letters, you'll be able to enjoy another seven free spins. Each letter appears only on one of the reels, such as B appearing on reel 1, O appearing on reel 2, etc. The round can trigger up to three times! Each win during the round is multiplied by 10x for some incredible chances to win.

In the High 5's Fox Fire online slot, you'll discover some breathtaking views of the Arctic. With a six-reel grid and three rows, and 729 winning ways, fox symbols appear to expand the reels up to seven rows with a maximum of 117,649 ways to win in the Ways Out Ways feature. In this high-variance slot, you can win top payouts of up to 250x your bet. There is no free bonus round in Fox Fire, but you can increase your chances by getting fox symbols on a reel to activate the extra rows and more ways to win. With each spin of the reels, an additional symbol position will be added up to seven positions/rows. The reels will return to their original three spaces once you have reached the maximum number of seven. A meter will appear above each reel when you reach the maximum number of positions on that reel. Following completion of the segment, the reels will hold the seven symbols for five spins before resetting.

High 5 Games creates casino games with unique gameplay and graphics that are unlike any other software provider. Additionally, they develop free social casino games and license their slot machines to online casinos worldwide, like those owned by IGT and Bally Technologies. Further, SkillonNet expanded its portfolio by adding High 5 Games in March 2020.

At the time of writing this article, High 5 Games had over 450 games in their portfolio.

Are the High 5 Games' games fair?

High 5 Games' games are fair, and their outcomes are generated entirely at random by RNG software.

Thanks to HTML5, all High 5 Games are ideally suited for mobile gaming, no matter the mobile device or operating system. If you enjoy playing slots on the go, you will be able to do so quickly and easily on iOS or Android.

What Licenses do High 5 Games have?

The Company has been licensed by many reputable gambling regulatory authorities globally, making it one of the rare software providers in the industry. High 5 Games is licensed by the UK Gambling Commission, the Gibraltar Regulatory Authority, the Malta Gaming Authority, the New Jersey Division of Gaming Enforcement, and the Danish Gambling Authority. You can be sure High 5 Games' software is fair and reliable as so many licensing authorities have given High 5 Games the green light to offer games within their territories.

Are the High 5 Games' games rigged?

The games offered by High 5 Games are entirely fair, and the outcomes are randomly generated using RNG software.

What New High 5 Games have been launched?

High 5 Games is one of the many gaming providers that release several new games each month. The past few months have seen the following new releases appear at online casinos:

What Games are due to be released?

This summer, High 5 are introducing customized in-game promotions called Rapid Rewards. Players will be offered random rewards with every spin. These rewards will range from feature boosts to cash and 3x payouts. Rapid Rewards will first be rolled out in New Jersey and Michigan on specific games. These include The Green Machine Deluxe.  Valley of Fortunes, Racking Up Riches, Defenders of the Realm, Betti the Yetti, and more.